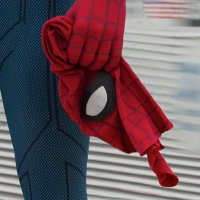 Here is the next chapter of our Twitter stories. More to follow soon. If you’d like to adventure with us, you can vote on my daily polls to see where Anna goes and what she does next!

Anna dove into the grass, rolling out of the direct path of destruction. She pumped her legs as fast as they would carry her. Dirt, and debris showered her. It was getting harder to see. Was she still running in the same direction?

There was no sense in looking back. She ran forward as long as her lungs would allow, the deafening whistle ever-present. Something hard smacked into her side, then after a few more strides across her face. She’d managed to stumble into the woods.

Even as far as she believed she had pushed herself, the screaming of the tornado had not lessened. Trees were being pulled, uprooted as close as 50 feet away. Her body felt as if it would be lifted at any moment. This was it, she really felt it. The end of everything.

The ground rushed at Anna’s face as thousands of tiny specs dug into her flesh. She clawed at anything she could as her legs flew out behind her. Her arms were quickly giving out. Maybe this was for the best─ maybe it was meant to be.

Anna’s hands kept finding dirt. She stretched with all her strength, each grab more disheartening than the last. How long could this last? When would her arms finally collapse? She choked and sputtered as the dirt flew into her lungs.

Her arms collapsed, the wind whipping her hair in a tangled mess behind her. She felt herself being dragged backward as she pawed feebly at the dirt. The debris pummeled her head as she kept it low to the ground. It was the only way she could breath in the storm.

Anna felt the second she let go. All the good and the bad things she had done with her life flashed into her mind. What would her mother think? Simply letting go without a fight─to what end? Being swallowed up and ripped apart by a bit of rotating air?

A curious thing happened. One that Anna never knew she had within her. It bubbled up and yelled from deep within her, “I will not!” Her hands flew out and clawed deep into the earth. She gripped with all her might, pulling at all the roots, dirt, and debris beneath her.

With a hearty yell, Anna lunged forward a foot, maybe more, and then another. And another. Until her hand found air. She searched it frantically─ looking for solid ground. Finally, she found it. It was directly below her body. A cave? A drop? She didn’t know.

A tree ripped away beside her, a rock narrowly missed her head. It was as if the earth itself were coming uprooted. It was do or die, this moment, and it was her choice. She decided it far better a death than this and took the leap of faith.

Anna fell flat onto the other side. She wasn’t quite sure how she had landed on her back and remained upright, but somehow─ here she was.

She sat up, brushing the debris from her face, hair, and neck. The roaring had ceased, leaving behind a deafening silence. She sat very still, just inhaling and exhaling. She wondered if the boy was looking in on her. ‘We’re watching your every move.’ They’d said.

She drew her legs up, and though she didn’t trust them completely, and there was quite a bit of wobbling, she finally stood up. After a few more steadying breaths, Anna finally took a look at her surroundings. Her eyes widened.

The bridge seemed to stretch on forever. The more she looked, the further it went. Surely this was an optical illusion, there had to be a support somewhere. She looked up, and then behind her. It was a dead end, a solid wall of rock. Suddenly she felt very vulnerable on this small, grassy island. It couldn’t have been more than five feet in diameter, the whole of it! She peeked over the edge, only to find that the few pebbles that fell over from her shoes hadn’t made a sound. Was she…on a pillar? Anna spun around searching.

Yes, she found. There was literally nothing around and even if there were, you wouldn’t be able to see it. There was miles, upon miles of fog! It was a wonder that the bridge was so clearly visible. But then, now that she thought on it, they must have done this on purpose.

Anna ran her hands along the rails and gingerly pressed her foot onto the first few boards. There were no creaks or groans, it was incredibly solid. Like it were new, and yet old all at once. Someone had put some incredible work into this bridge.

The first dozen or so feet went by slowly, but after she neared thirty feet, she relaxed to her natural gait. It was a strong bridge, the sort she remembered walking across as a girl when her family went abroad. Those were good times, before her father had gone.

There were noises in the air now. Things that she hadn’t heard before. They were low and continuous, like a drone, and then high pitched sounds mixed in. It was as haunting as it was lovely, ethereal in its own way.

The smell reminded Anna of the sea. The air was chilly and damp. It was the kind of breeze that made you get goosebumps and all the hairs on your arms to stand on-end. She wasn’t sure, but it sounded like water was very near.

Thanks for adventuring with me. Let’s see what Anna gets in trouble with next time. ❤

Someone left their cellphone in my store. I shouldn’t have unlocked it. A horror short.